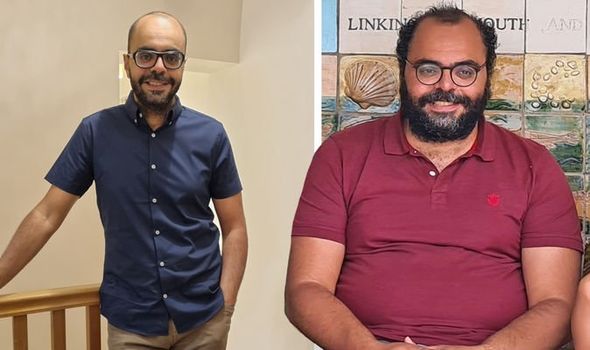 Weight gain has affected many people in the UK over the past year with gyms shut, increased stress levels and boredom resulting in excessive eating. For Adham Abdulraheem, 37, from Manchester, however, as a doctor working on the frontline throughout the COVID-19 pandemic, he prioritised his patients’ health over his own and found his weight slowly increasing. Outside of his pressurised work environment, Adham became understandably lazy and was unable to keep up with his young children. That, paired with significant weight gain and recently identified cholesterol issues, gave him a wake-up call and after bouts of intermittent fasting and following a Keto diet, he ended up at his heaviest so he turned to Noom where he lost nearly five stone in a year.

But Adham has experienced more than just dramatic weight loss, his lessons from the programme have not only changed his relationship with food, his general lifestyle and attitude towards exercise, but also the way he communicates with his colleagues and family too.

Speaking about why he chose this diet programme, Adham said: “I initially came across the Noom programme through adverts on Facebook.

“After noticing them a few times, eventually the timing felt right; I had just come back from holiday and hit rock bottom – I was at my heaviest weight and feeling very lazy.

“This prompted me to put some time and effort into finding out what the programme was about.

“I was most intrigued by the idea that it would equip me with tools that I can use in life in general, even after my weight loss journey is over.”

He also discussed previous diets and regimes he had tried: “As an adult, I have lost a significant amount of weight through the Keto diet and intermittent fasting, but these methods weren’t sustainable, and didn’t have a long-term impact on my weight – I actually ended up putting even more back on.

“I also absolutely love food – going on a Keto diet meant that most of these foods were off limits and ‘forbidden’ which I struggled with and often led to cravings.

“I also realised I was doing nothing activity-wise,” the doctor added.

“I would drive to shops that were 50 yards away or drive to work when I could have cycled in fifteen minutes.

“I even struggled to do physical things like run around and play hide and seek with my two kids, and if I ever needed something from upstairs, I would ask one of them to grab it for me. This got even worse over lockdown last year.”

Adham explained how the stress from his job didn’t help his weight: “The last year in my profession has been a real struggle; as a doctor there have been months of extreme pressure, which is probably now worse than ever as we deal with the aftermath of Covid.

“My wife was also a key worker for a food bank, so we had a tough time with home-schooling and arranging childcare which was financially draining.

“I was picking up extra hours at work all the time and didn’t do any exercise from June until the second lockdown,” he revealed.

“I was also very aware of my cholesterol levels which were quite high for my age at the end of 2019.

“I realised that I needed to do something about it and make some big lifestyle changes.

“I was reluctant to book a consultation with my GP because of all the pressures on the healthcare system at the time – I was definitely prioritising the health of others over my own.

“Now my energy levels and stamina have hugely improved and I feel a lot healthier.”

Adham went onto explain the benefits Noom provided him with: “It helped me realise that if I let my own health slip too much, this can have an impact on work and family and everything in between.

“It may sound simple but it’s true, and my wife is really proud that I’m now putting myself first in some way which really does have a huge impact on everything else.

“Just because we are living through a global pandemic doesn’t mean we should arrange our priorities in such a way that impacts our mental and physical wellbeing.”

So what’s Adham’s life like now following the weight loss?

“Post-Noom, I can come back from holidays and realise I have not put on even a gram of weight because I was able to use these learnings to reframe my previous conceptions,” he said.

“Even if I do put weight on when I am on a trip, I’ve realised that it doesn’t mean I’m a failure or that I can’t reach my goal – so now I don’t end up on a downward spiral as I have in the past with previous methods.”

“The concept of thought-distortion and re-labelling food through Noom made a massive difference to my mindset – there has not been a single time recently that my wife has made food and I’ve had to turn it down because of my diet.

“It just means that now I am considering portion sizes rather than cutting anything out, which was not sustainable or enjoyable in the past.”

From a mental a spiritual point of view, Adham said he “couldn’t have asked for better results”.

“The things I learned from Noom were not just applicable to food, lifestyle and exercise, but have totally changed the way I communicate with my team at work and my kids.

“I’ve noticed people starting to engage with me in a different way – for example, the programme taught me to talk about how things make you feel rather than whether it’s right or wrong etc.

“This new mindset has been particularly helpful in my relationship with my wife, and I’m now far more open to explaining how certain things have made me feel and how to remedy that. This has rubbed off on my whole family which is fascinating, and really positive,” he continued.

He also said the lifestyle change has impacted his children as they now witness him finishing a meal and opting for wiser food choices.

What’s Adham’s advice for anyone else looking to form healthy habits?

He said: “Remove that feeling of guilt – less guilt about not exercising, less guilt about having that bit of dessert. If you let guilt take over, it’s easy to reach the point of giving up your whole plan, so the best way is to learn to overcome it.”

And what challenges does Adham face following the weight loss?

“As the pubs and restaurants begin to open again, this will present new challenges for me, as we’ve been in lockdown the whole way through my Noom journey so far, and I don’t want to slip back into old habits when I eat out,” he revealed.

“However, I feel fully geared up. I hope there will be lots of family gatherings and weddings very soon in the future.”

Noom is a psychology-based programme that empowers you to make healthier choices by better understanding yourself, your brain, and the science of choice.

The company has been awarded multiple grants from the National Institutes of Health and was the first mobile application to be recognised by the Centers for Disease Control as a certified diabetes prevention programme.