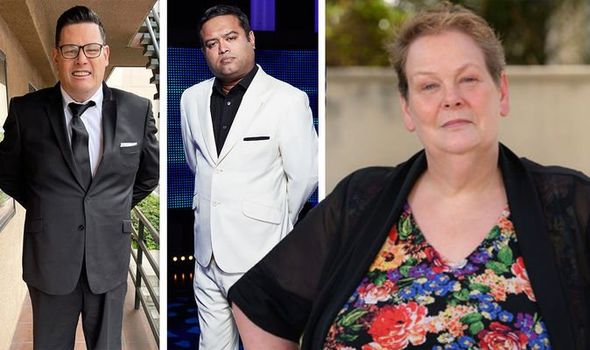 The Chase is airing its spin-off show, Beat the Chasers, this week and some of the world’s best quizzers are going head to head with members of the public. Amongst them is Mark Labbett, Anne Hegerty and Paul Sinha. Having been on TV for many years, the three stars have caught the attention of viewers due to their weight loss transformation. So which diet plans did they follow and how successful were they?

Mark, also known as The Beast on the ITV quiz show has lost a phenomenal amount of weight in the last two years.

At his heaviest, Mark was 29 stone, but after changing his lifestyle and overhauling his diet, he went on to lose a whopping 10 stone.

Over the years, Mark’s weight has yo-yoed, but it was around the time of the first lockdown when the number on the weighing scales continued to drop.

He said: “The principal thing has been running after a hyperactive three year old in lockdown when the nurseries were shut.

“Instead of going to the fridge for a bit of late-night snacking all I could do was just collapse on a heap on the bed.”

Mark tested positive for Covid and some of the side effects caused him to even more weight.

Having lost his sense of taste and smell for two weeks, he didn’t eat as much as he usually would.

The quizzer also changed what he ate, sticking to a high-protein diet instead of “pub meals with onion rings and garlic bread”.

Anne, also known as The Governess, took part in the 2018 series of I’m A Celebrity… Get Me Out of Here!

During her time on the show, she lost a stone in weight.

However, in more recent years, the TV personality has reportedly lost three stone.

Anne was in Australia for three weeks, and had to endure gruelling tasks as well as a gruelling diet.

The famous ‘rice and beans’ were on the menu daily, with the odd addition of meat and vegetables.

As a result of eating much less, combined with the amount of movement and exercise she did when taking part in the tasks, Anne slimmed down.

As for her weight loss journey now, Anne told The Sun how she goes about it.

She said: “I need to do it in small stages. If I just try and live healthily and drink lots of water, the weight loss will come.

“If I lose one or two stone, it’s not going to be obvious to anybody, but I’ll feel better in myself.”

Paul, aka The Sinnerman, decided to lose weight in 2018 after he was unexpectedly diagnosed with Type 2 Diabetes.

One way to put the diagnosis into remission is by losing weight so he set about this and took part in the ITV documentary, Diabetes: The Fast Fix, where he survived off of 800 calories a day for one month.

At the time, he tweeted: “I’ve lost a stone in weight. If I lose another I have a shout of getting an invite to a gay awards night.”

But his weight loss journey hasn’t been easy.

As of December 27, 2021, he told his Twitter followers: “Wasn’t even a particularly gluttonous Christmas period and yet I put on 4lbs.”

Referencing his yo-yoing weight and efforts to stay slim, he added: “And so the fightback begins for the 718th time.”