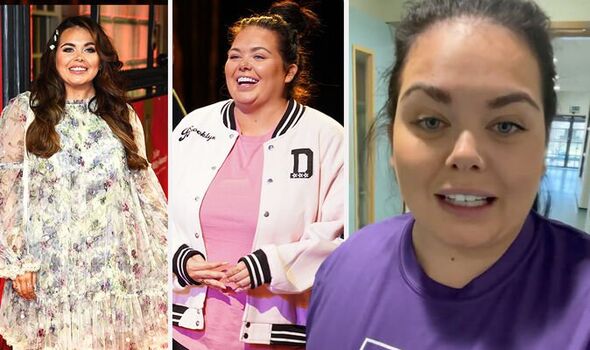 Scarlett Moffatt has been extremely open and honest about weight over the years. The Gogglebox star lost an incredible amount of fat before she headed into the I’m A Celebrity…Get Me Out of Here! jungle, before actively choosing to put some of it back on. Now the TV personality has begun exercising again but has said it’s not about the way you look, but how moving your body makes you feel.

Before entering I’m A Celeb, Scarlett lost three stone after being told by a doctor she was “obese”.

Having slimmed down, and been crowned the Queen of the Jungle, Scarlett went on to launch her SuperSlim Me Plan DVD, and it was extremely successful.

Posting on social media on launch day, Scarlett wrote: “Let’s all do this together and motivate each other to be the healthiest & feel as SUPER as we possibly can!”

She also revealed she lost seven and a half pounds in the first week of doing it.

There were then rumours Scarlett had achieved her weight loss through a series of boot camps and eating around 700 calories a day – not by the workouts in her DVD.

A source said: “The DVD is a sham really. There is no mention of the boot camp where she was climbing mountains and exercising for six hours a day.

“The DVD gave fans an unrealistic portrayal of how she lost weight.”

In the years following, Scarlett put some weight back on, going from a size eight to a size 12, attributing this to getting “the balance right” between exercising and enjoying life.

Then late last year, Scarlett joined Frankie Bridge on her Open Mind podcast and spoke about her weight loss DVD.

After going from a size 18 to a size 8, Scarlett said she faced trolling after putting on weight following the release of the DVD.

But she explained how she had “put on weight on purpose” to discourage fans from buying her fitness DVD, adding that the DVD was the “worst thing she’s ever done”.

“I slowly realised it was quite detrimental to my mental health,” she explained.

“I’ve also deleted all my before and after pictures…Not only were they bad for my peace of mind it wasn’t really good for other people because now I look like my before picture again.”

Scarlett added: “I sort of rebelled against the DVD because I just didn’t like how it happened and I just wasn’t for it anymore.

“I purposefully started putting weight on. I was sort of like, ‘if I get big again it can’t get brought up’. I can’t have this stigma attached to me about this DVD and people will stop buying it.”

Scarlett went on to reveal that she did actually follow the diet on the DVD, saying she “cut out a lot” to shed weight.

She said: “I think people thought I had been walking and rambling up mountains for six months but it wasn’t, I genuinely did just do those exercises [in the DVD] but obviously I had to cut out a lot of food from what I was normally eating.

“I think now that is what I want to try to say to people – ‘please don’t think that you can just own this DVD and then instantly you can lose that amount of weight, it is a lot of pressure and it is a lot of work.’”

Now, Scarlett has teamed up with This Girl Can to “help all women rediscover the joys of getting active”.

She explained how her relationship with exercise has been “fraught” over the years.

“If your sole focus is on how exercise makes you look – rather than how it makes you feel – then it can be toxic,” Scarlett commented.

“In my twenties, I used to think I had to be at the brink of passing out or losing a litre of sweat at the gym to feel like I’d a decent workout, and I had an unhealthy habit of checking the scales straight afterwards. And in my head, I felt so judged.”

Now in her thirties, Scarlett is on a “journey to rediscover the joys of getting active”.

Having attended a new group exercise class, Scarlett said: “The classes are designed to be fun, where getting it wrong is totally alright.

“It’s a no judgment class where making mistakes is celebrated – the fact you are being active is something to be proud of,” she told The Telegraph.