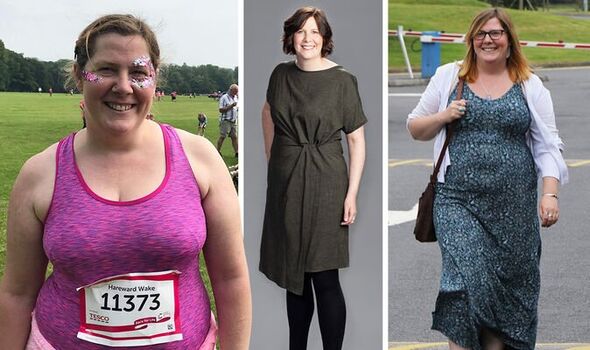 Naomi Davies, 42, from London has lost a whopping five stone. She used to weigh 17st and was “out of breath just walking to the shops”. But having lost a third of her body weight, Naomi now runs 10km races. She told Express.co.uk how she did it.

Naomi spoke about how she ended up weighing 17st: “I was comfort eating. If I was stressed I would eat lots of chocolate. It was Easter at the time and I was eating a chocolate Easter egg every day and snacks on top of that.”

In terms of how her weight affected her life, Naomi explained: “It impacted on my self esteem, I didn’t like the look of myself, I didn’t feel happy at all.”

Naomi, like many others who are overweight, tried several times to lose weight: “I tried different diet plans, but they just didn’t work well for me.

“I was using spray oil for cooking, and eating low-fat yoghurt, cheese, and drinking low-fat milk, and I just ended up having lots of it.

“I didn’t realise these versions were full of sweeteners. I’d always been told it was a healthy option. I just didn’t enjoy cooking or eating when I was on other diets.”

“Following a period of poor mental health when I was aged 39, I was prescribed medication for low moods, which made me gain weight and made me more hungry,” she revealed.

“I was 17st and leading a sedentary lifestyle, with hobbies such as crafting. I could barely walk to the shops without taking a break because I would be so out of breath.

“I felt as though I had lost control over my eating and ate to comfort myself, and then I’d feel so guilty about it afterwards.

“When I found Second Nature, I had no idea how it would impact my life.”

Doing online research, Naomi saw Second Nature was backed by the NHS so she felt she could “trust it”, it also had small group sizes, no “embarrassing” weekly weigh ins, and it was cheaper too.

With the help of the health coaches and exercise programme, Naomi changed her diet and took up running.

One year later, she now weighs 12st and competes in running races.

“I have found a new love of cooking, and enjoy delicious home-cooked meals.”

Via the app, Naomi was also able to access more than 300 recipes and she started to plan her weekly meals in advance.

“I went from skipping breakfast, eating a jacket potato with cheese and beans for lunch, and pasta and cheese for dinner, then snacking on chocolate and crisps, to eating delicious home-cooked meals. My weekly shop was £60 – now it’s £40,” Naomi said.

“I now eat fruit and yoghurt for breakfast, leftovers for lunch, and dishes like coconut dahl, creamy salmon or jerk chicken for dinner.

“Second Nature has taught me how to have a balanced plate, and about portion sizes too. I used to have a massive plate of food and eat really quickly. Now. I still have a decent size portion, but I eat slowly, I enjoy my food and stop when I’m full.

“I’m cooking a bigger variety of food, and the recipes are really easy to follow. There are meals to pick if you’re in a rush, meals if you want to eat less carbs that day – and also lots of vegetarian and vegan options.”

Naomi added: “I’d tried other diets in the past, but they taught me that food is the enemy. Now food is my friend.

“Second Nature isn’t a quick fix, but a sustainable change of living. I always felt too overweight to do the activities I used to love, such as walking. This year alone I’ve been on two week-long walking holidays – something I never believed would be possible.

“Everyone always asks me how I’ve lost so much weight. When my friends see me eating fish and chips they say ‘oh I thought you were on a diet’. I tell them I am, and it’s about having a healthy lifestyle long-term, and that means eating things in moderation – not cutting them out altogether.

“I don’t even feel like I’m on a diet. I don’t have to put my life on hold for it. If I’m on holiday, I can enjoy my holiday, and then make healthy choices the following week. It doesn’t matter and I haven’t done anything wrong. And to me, that’s a great point, you can have that healthy mindset,” she explained.

“I feel more in control of my eating, and no longer see food as a reward. If I’m tired and want a takeaway, I’ll remind myself that I’m going to have the healthy dinner I’ve planned, and that there’s a takeaway night in the diary the following week. I’m in control.

“If I want to have an ice cream after my 10km run, I know that’s fine. I can enjoy it, and that’s not a bad thing and not something I need to feel guilty about.”

“Most importantly,” Naomi’s “confidence has improved”.

“I feel so much better about myself,” she remarked.