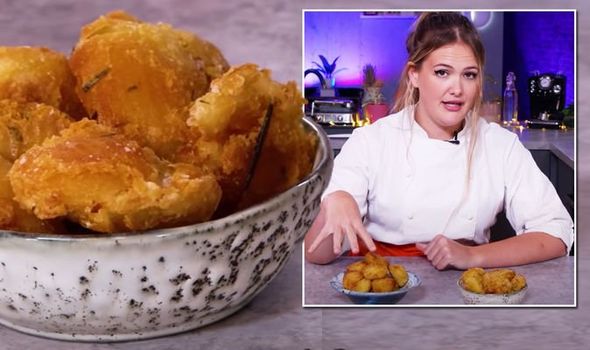 How to make perfect roast potatoes, chefs and home cooks have pondered it for many years. The people behind SORTEDfood have now tested it with the help of Poppy O’Toole too aka the Queen of Potatoes.

Ben, a chef, and Barry, an amateur cook, went head to head, trying out separate recipes.

While Ben devised his own recipe, Barry used Reddit suggestions to inspire his method. These included adding cornflower to the potatoes and cooking in stock.

Which method came out out top?

The methods were different, although there were two similarities. Both chose King Edwards, and they also both made sure to remove the eyes of the potatoes.

Both also agreed their par-boiled potatoes need to be as fluffy as possible.

Barry said: “The key to roast potatoes is that they need to fluff up massively like a big woolly sheep.

“And then you smother the wool in beautiful fat and then roast them off.”

Ben opted to quarter his potatoes. He then prepped his cooking water, to which he added “lots of salt” and also bicarb of soda, recommending “half a teaspoon to a couple of litres of water”.

Bicarb is good for fluffing up the outside of your potatoes.

Instead of putting his raw potatoes into cold water, he dropped them into boiling water and boiled them for five to six minutes to get a fluffy edge.

When he drained the par-boiled potatoes left them by a fan to cool, although you could leave them by a window.

You could even put the potatoes in the fridge overnight, as Ben did with a previous batch, to increase the texture even more.

Then, Ben doused the potatoes in half olive oil and half goose fat before putting the potatoes on baking paper on a tray for the oven to prevent sticking.

The potatoes went on at 240 degrees to start the frying process, with Ben eventually turning the heat down to cook the potatoes in the middle.

Ben kept the herbs, garlic, and raw herbs to the end, tossing them through toward the end to prevent them burning.

He also advised “burping” the oven, which means releasing steam from the oven every 20 minutes or so.

Barry opted for halving his potatoes.

Taking advice from Reddit, he used garlic, a stock cube, and salt in his potato water and put potatoes in cold water, slowly heating it to par-boil them.

Once the potatoes were parboiled he drained them and shook the par-boiled potatoes up in a colander so they got nice and fluffy. Barry then left them to steam dry in the colander before adding cornflower to help get them crispy, mixing in a tablespoon of the cornflower.

Which his potatoes were steam drying, Barry put beef dripping to the tray to roast the potatoes in and allowed this to cook in the oven.

This is so that his boiled potatoes would go into sizzling hot fat and behind to crisp up immediately.

He put the potatoes into the hot oil tray, added more rosemary, and then put them in the oven for 40 minutes at 200.

Then, 20 to 25 minutes before they were done, he gave each one “a little squish” with a potato masher and then put them back in for another half an hour to 40 minutes.

So, which method came out on top?

However, overall she preferred the Reddit-inspired potatoes.

She suggested combining the two methods.