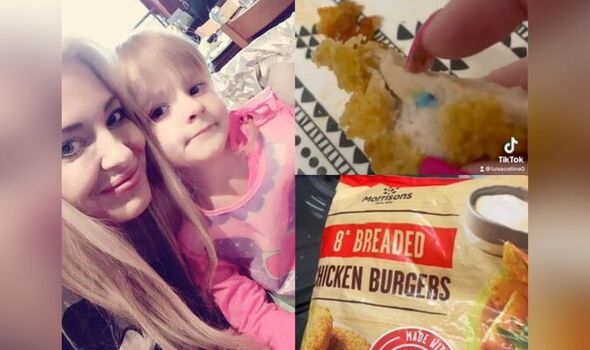 Luisa Collina had been preparing dinner for her two children, Zana and Enzo, last week when she claims she found a “small piece of blue plastic” after cutting into a Morrisons breaded chicken burger. The 42-year-old contacted the store, and she says they told her it might have been from a “food preparation glove.”

Although Morrisons confirmed it has offered her a voucher off her next shop as an apology, she feels the chain should be recalling the product, reports Teesside Live.

Luisa, who is a full-time carer for daughter Zana, 12, said: “I was making food and I have to cut the burgers up because my daughter is severely autistic, so I’m really glad that it did.

Luisa, from North Yorkshire, said she grabbed her phone and picked the burger open and pulled out the piece of plastic.

She filmed her shock and uploaded the video to TikTok.

She said her initial reaction to the situation was not to feed her kids because she “didn’t really know what it was.”

She added: “Even if [my daughter] had not eaten it and just seen it, it would have put her off anything chicken based.

“She’s autistic but she’s funny [with] eating, so it takes us a long time to eat things, and if she’d have seen that then that would’ve been it.”

Luisa, who said her mother bought the product from the Berwick Hills store and that she does not usually shop at Morrisons, contacted the supermarket through Facebook messenger.

She claims they offered her £10 to spend in-store as a “goodwill gesture,” so long as she got a Morrisons card.

She explained: “I was like, ‘is that it?’ They knew what was wrong because they said to me it is a processing glove. I thought that they must know that. I wonder if the glove had fallen in and they’ve had reports and people contacting them apart from myself.”

Luisa said she thinks there should be a product recall and that she won’t buy anything from the supermarket again because of her find.

A Morrisons spokesperson said: “We have investigated the issue with our supplier and believe the plastic may have originated from food preparation gloves used at the site.

“We apologise to Ms Collina and wanted to offer a voucher off her next shop with us to say that we were sorry.”