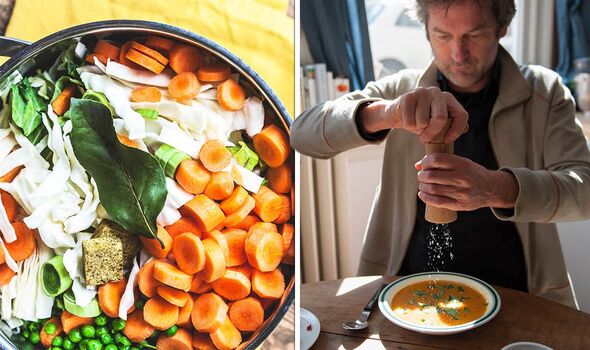 There are few savoury ingredients that you can’t add to homemade soup, with everything from vegetables and fresh proteins to dried pasta and grains all used in different recipes for this staple dish. Though the flavours are easy to combine, hours of hard work can be quickly ruined by adding too much seasoning – particularly when it comes to salt. However, according to experts, there are ways to salvage your soup from this common kitchen mistake.

Even if you haven’t made the soup entirely from scratch, adjusting the saltiness of the dish can be done by adding more than just a crack of pepper to balance it out.

In fact, according to Chef Matt Krimsky, senior director of culinary at Genuine Foods, there are at least four methods that are much more effective at salvaging the flavour of this warming broth-based meal.

He explained that one of the “easiest and most effective” ways to improve the taste is to “simply make more soup”. While you may not need more, you can always freeze the excess for another day.

The culinary expert said: “Increasing the total volume will decrease the amount of total salt.” For example, you can double a batch of tomato soup or cream of potato once you realise it’s too salty. By so doing, you will eliminate the excess and make it stretch further into the second serving.

If you don’t have the capacity to make more soup, diluting it is a more feasible alternative – and you don’t need to worry about making it too watery.

According to Matt, adding unsalted broth is the best ingredient to dilute oversalted soup, though you should always allow time for it to simmer back down to the original consistency if you are concerned about ruining the thickness.

You can add as much or as little broth as required and add flour or cornstarch to supplement the consistency. The Genuine Foods chef noted that this should be pre-mixed with a little water to “create a slurry” that “stirs well into any soup”.

Doing so will speed up the thickening process to save time while also helping the ingredients to absorb even more salt and adjust the flavour.

Another way to dilute a sodium-heavy soup is to add a cream or milk base, whether it be dairy or plant-based.

To do this, simply stir in a small amount at a time and taste as you go. If you’re already working with a condensed soup base, you should substitute the milk for water as it can help to take the edge off the saltiness.

The potato is the best-known and most-used vegetable when dealing with a dish that is too salty – including soup.

It is best used in its raw form to extract the most salt from the liquid, and you don’t even have to chop it up beforehand, according to Matt.

He recommended adding a whole peeled potato to an already simmering soup until it is cooked through, which should take around 20 minutes.

Once the potato has softened and absorbed some of the salt, you can remove it from the pan. Matt added: “While you shouldn’t leave the potato in your soup, it is edible. If it’s not too salty for your taste, mash it with other potatoes to balance out the saltiness.”

If you’re making a very savoury dish, or even enjoying soup from the can, adding acidic ingredients is one of the easiest ways to adjust the flavour.

To cut the salt content, try adding a squeeze of lemon juice to lentil and mushroom-based recipes, or a splash of red wine vinegar to tomato and meaty soups.

Matt added: “Acidic and tangy garnishes, such as lemon zest, lime wedges, balsamic, or plain yoghurt can also help cut down the salty flavour. Fresh flavours, like herbs, can help too.”

While fixing a salty soup is easy, it’s not something you want to have to do every time you make it from scratch. To avoid making the unfortunate mistake again, there are a few things you can try.

Of course, the easiest remedy is to add salt in very small amounts to avoid overdoing it but there are other things to consider. Matt noted that you should also be aware of adding salty ingredients like canned beans, tomatoes, frozen vegetables and pasta boiled in salted water that could change the taste.

The chef added: “Don’t let the soup boil aggressively. While reduction enhances flavours by concentrating them, it also intensifies salt content. Keep soup just below a boil, and leave the pot covered or partially covered to trap steam.”