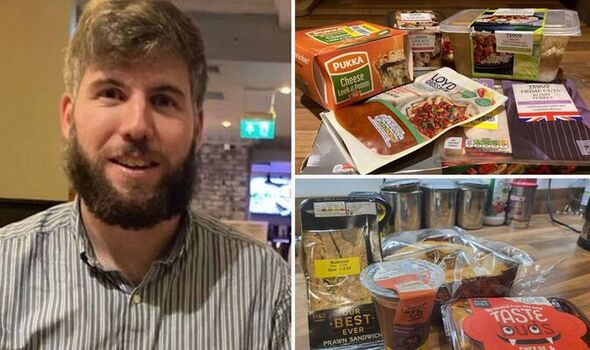 Gregory Ford, 30, only picked items with stickers on, highlighting the food was significantly reduced. They typically have short use-by dates so often have to be consumed on the same or next day. Gregory had been given a tip that it was a useful way of shopping for people on low budgets, including customers on Universal Credit.

But the man, from Hull, was largely disappointed with the offerings at various supermarkets, including Tesco and Marks and Spencers.

By day six, he had to eat madeira cake for breakfast and said he was “considering his life choices”.

Gregory is a reporter with Hull Live and had attempted the experience to help its readers.

“You’re also at the mercy of selection and dates, there is no guarantee that there will be enough to put together the meals you need and even if there is it might spoil before you get to it,” the journalist wrote.

“Signing off with the image of a nearly 30-year-old man eating a third of a madeira cake for breakfast and considering his life choices on day six. Regret.

“A lot of the food in those sections is pricey to begin with and store brand value products might still be cheaper.

“This experiment was extreme, no one lives on yellow sticker food alone and there is a place for the odd bargain in your weekly shop.”

He did bag a creamy chicken and chorizo pizza from Tesco, which was “not too shabby”, but got “carried away” on day one.

Gregory continued: “The rest of the week was marred with similar misadventures, in the hunt for the yellow sticker you’re very much at the mercy of a small selection of items.

“I managed to pick up some reduced mixed veg, a reduced sliced bread and some bagged salad from Morrisons the day after my Tesco trip. But that was too late for my sandwich filling and breakfast for which I’d had to pilfer a couple of slices from my housemate.

“That night’s tea was a massaman which was vaguely disappointing. The rest of the sandwich filling was used the next day but I was already getting worried about the turkey which had shot past it’s sell buy date.

“I also gorged myself on the majority of a pack of spicy cocktail sausages I’d spotted on the reduced aisle that day, caught by the impulse of a bargain hunter and regretting my choices later on.”

Gregory did enjoy a pie on day four, which he had been able to freeze upon purchase earlier in the week.

Bargain hunters can often be spotted pounding the aisles of supermarkets and hovering around clearance aisles lookingg to bag items at rock bottom prices.

Supermarkets often reduce the price of food nearing its use by date to shift stock and avoid food wastage.

Yellow stickers are often put on items either soon after the store opens or shortly before it closes.