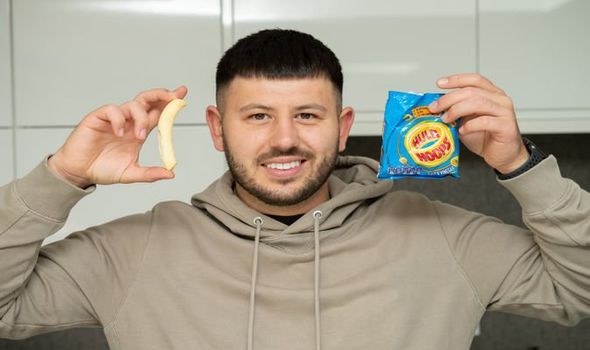 Sam Lightfoot, 26, discovered the massive salt and vinegar snack during lunch with his family. The huge crisp measures in at four inches long, beating the previous world record of 3.7 inches.

Sam’s special packet was inside a multi-bag bought for him by his 12-year-old cousin Maisie, as part of the family shop in an Aldershot Tesco.

When he made the discovery on August 20, he said he could feel something unusual before opening the packet.

He said: “When I opened it I was like ‘whaaaaaat’, then I realised it was an extra-long Hula Hoop.

“I went and showed everyone. They were very impressed.”

The off-shore wind farm planner said the find was among his biggest achievements and he has vowed to save it forever – and to protect it from family dog Mylo, a seven-year-old golden doodle who loves crisps.

“We have been worried about breaking it so we are keeping it safe in its packet in the utility room.

“We have seen online that someone got £20,000 for a puffed-up Dorito they found, but we are not planning to sell this – it is too sentimental.

“I will probably keep it forever and hand it down through the family.”