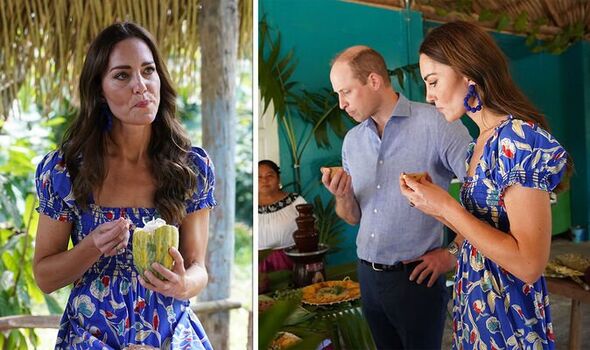 Queen Elizabeth decides on the important rules royals must follow when they travel abroad, and members of the Royal Family are reportedly banned from eating shellfish, due to its food-poisoning risk.

Butler Grant Harold explained: “It is a very sensible move to abandon having seafood when out and about on public duties.

“We don’t want a member of the Royal Family having a serious reaction to food poisoning.

“Especially if she is on an overseas tour,” he told Woman & Home magazine.

The Queen notably abides by the guideline of not eating shellfish and Kate and William will have to follow this rule during their upcoming Caribbean trip.

Chef Matt Dean Pettit described the tasty food as “delicious” and explained: “The day before going on vacation with my family gave me the perfect opportunity to dream of all the delicious shellfish I was going to cook up once I got home!”

It is rumoured, however, Prince William really likes sushi and Prince Charles broke this rule once after he was seen having seafood during an official trip.

The Queen reportedly refuses to eat oysters and she really dislikes the delicacy.

According to former royal servant Charles Oliver, the Queen and the late Prince Phillip hated oysters: “Inevitably there are one or two things the Queen and her husband do not like, and the hosts are duly warned in advance,” he explained in the book Dinner at Buckingham Palace.

“The palace instruction states only: ‘Neither the Queen nor the Duke of Edinburgh like oysters.”

Former royal staff have previously explained the Queen also hates garlic and the ingredient is banned in the Palace.

Royal chef Darren McGrady explained: “We can never serve anything with garlic or too much onions.”

Another former chef, John Higgins, said to the National Post: “At Buckingham Palace you don’t cook with garlic. I suppose, in case you get the royal burp.”

McGrady explained during an interview other foods are also banned for dinner.

“No potatoes, rice, or pasta for dinner,” he told The Telegraph.

McGrady said about the Queen: “When she dines on her own she’s very disciplined. No starch is the rule… Just usually something like grilled sole with vegetables and salad.”

According to People for the Ethical Treatment of Animals’ website, Prince Charles also banned French foie gras in 2008, over concerns for animal welfare.

The Duke and Duchess of Cambridge are set to start their Caribbean royal tour on March 19.

They had planned to visit a cacao farm in Indian Creek village during the first day but have now been forced to cancel.

This is because residents have opposed the royal trip and carried out protests in the area.

Kate and William will travel to Belize, Jamaica, and The Bahamas as part of their Caribbean royal tour.